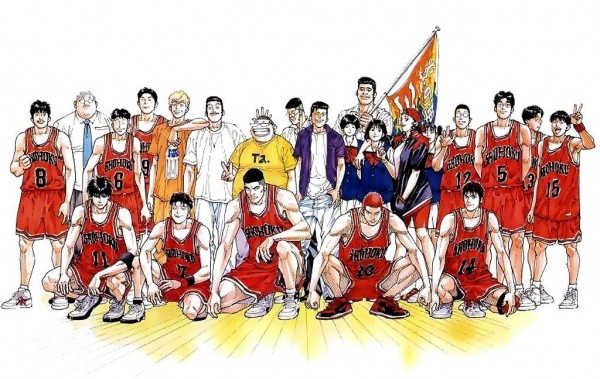 as I keep my words to my review of slam dunk and finally I got around and here u go. (;
it’s actually my second sports genre and I have to say it’s certainly amazing and very roller coaster while u are reading.

although the art style isn’t matched everyone’s tastes these days, it’s still very phenomenal and old school. in term of board scenes are very clear and smooth.

ok let’s back to the story, it goes very fast and rhythm is very nervous. their opponents are very strong but due to Shohoku is protagonist, they definitely win in the end up.

I can say, there aren’t many flashbacks and doesn’t focus on their friendships, but it’s pretty enough to describe a story. it’s wholesome as well. everyone could accept it and doesn’t care about it. Masterpiece is just a masterpiece, it never changes.

because it’s only my second sports genre, the difference between Haikyuu is - haikyuu is more peaceful and harmonious than slam dunk and haikyuu focuses on how they grow up and train very much. my personal opinion is - if haikyuu had been without those friendships part, it wouldn’t be like as famous as slam dunk. from my view is everyone likes to see them grow up and friendships development more than tournaments. (maybe the reason is I don’t play volleyball)
however, slam dunk without many trains and friends developments, but it’s still very impressive and touched. also haikyuu describes too many fights with weak team. it’s not necessary, in term of the pace of Haikyuu is kinda too slow.

but I know fans why love haikyuu so much, because their characters, actually the roles in slam dunk are handsome too, it’s just another vibes!
I think it’s my entire thoughts on Slam dunk so far, btw, I just think of - don’t u think Haruko is very as similar as Keiko (Yuyu Hakusho) ？their personality and they accept delinquent too.

the female protagonist in Shonen is very innocent and kind, don’t u think so??

meanwhile, sports story wasn’t my comfort genre, but to be honest, spots genre is easy to resonate with audiences and hit people right in the feels. also it’s very roller coaster. although it’s not like Shonen battle story, it still hits the spot, because these is tournament and your blood just pumps up by leads and bounds and have butterflies in your stomach.

actually not only slam dunk and haikyuu but many works!! Is shoot resonated with readers easily too??